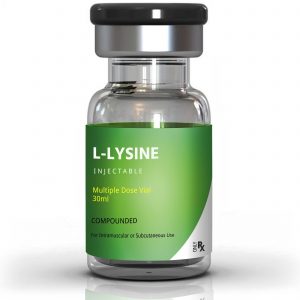 L-Lysine: What is it?

L-Lysine is an essential amino acid that serves as a building block of proteins in the body. Lysine was first isolated from casein (a milk phosphoprotein) in 1889. It was first introduced in the United States as lysine hydrochloride in 1955.

Our body needs the amino acids lysine to restore and produce protein hormones that are constantly being used by in our body. These protein hormones, like insulin, melatonin, and growth hormones, are composed of hundreds of thousands of amino chains including L-lysine. Since it is necessary for human nutrition, l-lysine must be introduced into the body through food or supplements because it cannot be synthesized in the body1.

To ensure that you’re meeting your essential needs of this amino acid, here are a few of the best food sources high in lysine.

The Many Uses of Lysine:

Herpes is an inflammation of the sensory nerves caused by Herpes Simplex Virus one or two. It needs a constant source of arginine in order for this virus to replicate.

Common antiviral medications can treat cold sores, and in addition to these antivirals is lysine. Studies show that the amino acid l- lysine can be effective to slow down or inhibit the replication process of Herpes simplex virus by interfering with the absorption of arginine into your intestines2.

Lysine is not only beneficial in boosting the immunity but is also a fat burner. L-lysine helps in the creation of carnitine which converts fatty acids into energy aiding in weight loss. As it increases the energy levels, l-lysine boosts the endurance, thus supporting the exercise performance and overall physical performance. It is an essential amino acid that helps build lean body mass and promote muscle strength3.

L-lysine is required for the production of carnitine which facilitates the process of converting fatty acids into energy. Carnitine can play an important role in reducing the level of cholesterol in the body. An elevated level of LDL cholesterol is associated with an increased risk for coronary heart disease and atherosclerosis.

Other Incredible Benefits of L-lysine

In a more natural way, L-lysine is commonly found in meat, fish, eggs, dairy products, avocados and nuts and introducing one of these foods into your daily diet is the only way to make sure you’re getting it.

However, the bioavailability of lysine is reduced with conventional food preparation methods, such as heating foods in the presence of fructose or glucose, sucrose or yeast, and cooking in the absence of moisture at high temperature.  Without enough lysine in the diet, a range of health conditions may result such as kidney stone formation, low thyroid hormone production, asthma, chronic viral infections, abnormal growth and development and some disorders of the reproductive system4.

Therefore supplements can be extremely beneficial in cases where you know you aren’t able to meet your daily value recommendations of specific nutrients.

L-Lysine Supplements: Who needs them?

A deficiency of this amino acid happens and there are multiple instances where l-lysine supplements are necessary for some people more than others.

As women age, they naturally lose muscle mass and strength. According to the Journal of Nutrition, daily supplementation of lysine, along with arginine and beta-hydroxy-beta-methylbutyrate (better known as HMB) positively increases muscle functionality, strength, mass and protein synthesis in older women.

According to the University of Maryland Medical Center, L-lysine helps your muscles recover after a hard workout, game or race. They are most susceptible to deficiency of L-lysine because this amino acid is commonly found in diets rich in animal products.

The body breaks down the muscles in the body to use as energy, thus, lysine supplementation prevents further muscle wasting for patients suffering from these diseases.

L-lysine is necessary for the formation of collagen

L-lysine regulates serotonin which contributes to well-being and happiness. In addition to mood, serotonin is also involved in regulating appetite, sleep, memory, and learning.

While eating food sources that contain amino acid L-lysine is considered safe, the use of L-lysine supplements have been known to cause some minor reactions that include stomach pain, nausea, and diarrhea.

Use of Lysine should also be used with caution in pregnancy and lactation due to lack of evidence.

While L-lysine benefits those with a large number of diseases, there is evidence that it can also pose a risk to patients with kidney impairment because it can cause chronic kidney (renal) failure, inflammation in the kidney (interstitial nephritis) and increased calcium absorption5.

Patients with liver impairment should also be cautious in taking L-lysine supplements because it can increase the viral load of HIV patients.

Overuse of lysine supplements can reduce the level of the amino acid, arginine, as lysine competes with arginine for absorption.