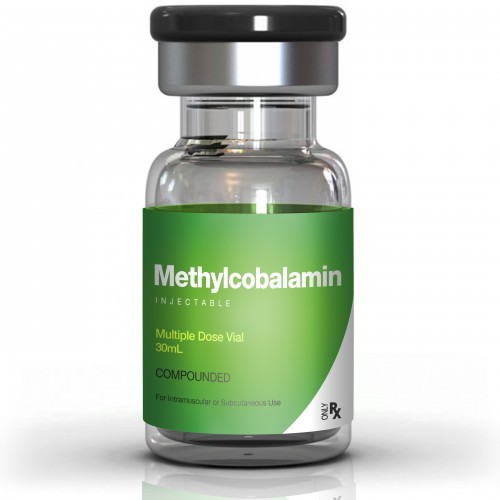 Methylcobalamin injections are also known as B12 Vitamins. It is found in several types of foods such as fish, meat, dairy, and shellfish. Although methylcobalamin and vitamin B12 are used interchangeably, B12 is also available as hydroxocobalamin and Cyanocobalamin.

Methylcobalamin injections are a very effective treatment for B12 deficiencies commonly found in patients who suffer from disease or have nutritional deficits (such as ultra-low calorie diets or pernicious anemia). Methylcobalamin is the only active form of B12 found within the Central Nervous System (CNS).

Our bodies naturally have a supply of methyl molecules used for a normal process called methylation. Which is important for stabilizing free radicals and detoxification to keep the body healthy, free of illness, and functioning optimally. Injections of methylcobalamin restore the body’s supply and is an excellent solution for optimal health.

Methylcobalamin is a water-soluble vitamin and a biologically-preferred version of vitamin B12(cobalamin) that is naturally found in food. It is the only form of vitamin B12, medically known as cobalamin, that is naturally supported by the human body. The body absorbs this vitamin easily and doesn’t store too much of it. B12 Methylcobalamin plays an important role in cellular metabolism as it acts as a cofactor in many biologic pathways. In general, it is used primarily in your liver, brain and is the only active form of B12 found within the Central Nervous System (CNS).¹

B12 Methylcobalamin helps make DNA, nerve, and blood cells and is crucial for a healthy brain and immune system. It also plays an important role in weight loss, and overall nutrition and wellness. Your metabolism wouldn’t run smoothly without it. Our bodies naturally have a supply of methyl molecules used for a normal process called methylation. It is important for stabilizing free radicals and detoxification to keep the body healthy, free of illness, and functioning optimally. Methylcobalamin injections restore the body’s supply and are an excellent solution for optimal health.

Methylcobalamin has a methyl donor attached to the cobalamin compound. It is the purer, biologically-preferred version of vitamin B12 that is naturally found in food and can be absorbed and used by the body immediately.

It is the only form of vitamin B12 that is naturally supported by the human body without having to go through an unnecessary chemical breakdown. Methylcobalamin injections are better absorbed and retained in higher amounts within your tissues because it can bypass the absorption process in the small intestine and can be immediately used by the blood to make more cells or carried to the nervous system where it also plays an important role. In general, methylcobalamin is used primarily in your liver, brain, and nervous system.

The Effectiveness of Methylcobalamin Injections for Sale

Methylcobalamin Injections are shown to be effective for the treatment or prevention of several conditions:

Methylcobalamin Injections: How it helps you shed pounds?

People who are on certain dietary restrictions, especially vegans and those undergoing a weight loss regimen, may have a higher chance of developing vitamin B12 deficiency. This is also true to people who are doing aerobic exercises who easily get tired because low B12 levels can sabotage their respiratory and circulatory system, thus producing fewer results from their workouts. When you are deficient in B12 your body becomes tired, weak, and can lead to anemia. The regular intake of vitamin B12 methylcobalamin can boost your energy by regulating and ensuring a steady metabolic rate to help the body convert carbohydrates into glucose which is then used as body fuel. It plays a major role in a number of body’s essential functions  including DNA synthesis and the formation of red blood cells to transport sufficient amount of oxygen to its various tissues to prevent fatigue and weakness.³ Methylcobalamin works even better when taken along with the HCG shots.

How is Methylcobalamin best taken?

Methylcobalamin is injected intramuscularly or subcutaneously. It can be given by a healthcare provider and can teach you how to self inject. A 1000mcg/ml of methylcobalamin is usually injected every 72 hours but it is your doctor who will always determine the dosage and duration you will use when taking methylcobalamin supplements. If you missed a dose of it, take it as soon as you can but never take a double dose.

Side Effects of Methylcobalamin Shots

Methylcobalamin is considered likely safe when used appropriately. However, there are reported adverse effects in taking large doses of methylcobalamin. If you are taking other medications, vitamin B12 may interfere with its effectiveness. Be sure to inform your doctor at the HCG Institute about your full medication history before you receive vitamin B12 methylcobalamin injections for sale online.

You may think that the quick fix to a vitamin B12 deficiency is to eat foods that are rich in B12 or to take supplements, but the solution may not be as simple, even meat eaters can be deficient in B12.  A B12 deficiency can be caused not only by inadequate amounts of the vitamin in the diet but also by poor absorption in the gut.

Methylcobalamin supplements are available in several forms including topical solutions, oral preparations, and injectable medications that are being sold online. Taking methylcobalamin as an oral dose is largely a waste of money.  As much as 99% of what you swallow is not even absorbed.  It is just passed through your body. Proper absorption of vitamin B12 requires the normal function of the digestive system, specifically the stomach, pancreas, and small intestine.

In this case, or for those who would simply like additional B12, methylcobalamin shots are available. This methylcobalamin injection method bypasses the digestive process and goes right into the bloodstream for better absorption to be retained in higher amounts within your tissues.

Ready to Get Started?

At The HCG Institute, we offer a pure and biologically-preferred version of vitamin B12: which is the Methylcobalamin injection to ensure you are getting all the nutrition your body needs to be healthy.  We source our products in the USA at partner 503B FDA Registered pharmacies with official regulatory testing to ensure purity and consistency.

The HCG Institute serves patients nationwide via telemedicine by our board-certified physicians to provide medical supervision and a prescription, thus giving you the best support in the comfort, privacy, and convenience of your own home.

Get your prescription and order refills safely, quickly, and confidentially by signing up in our Patient Portal or call us at 877.228.2158 to discuss the plans suitable for your needs.  Get started now!